We all live in a different world since 24 February 2022. The premeditated barbarian war waged by the russian federation against Ukraine already resulted in separation of half of the Ukrainian families. According to the UNICEF just in one month since the start of the war 4.3 million children have been displaced, including 1.8 million of them having to flee abroad. This is more than half of the country’s estimated 7.5 million child population. Many of these children with their mothers have now been arriving in Berlin looking for safe shelter. 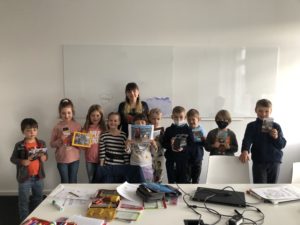 In times like these, every act of support is valuable and can make a real difference. The goodwill of people and organizations all over the world standing with Ukraine and offering help to the Ukrainians fleeing the war has been overwhelming. Already in early March Zalando SE, a Berlin-based multi national online platform for fashion and lifestyle, reached out to the German-Ukrainian Academic Society (DUAG/ UKRAINET). The company offered temporary free use of some of their centrally-located office space, complete with access to kitchens, tee-making facilities, fruit baskets and even corona-tests.

This generous offer was passed to the Society’s local partner organization, the Ukrainische Schule Berlin. Founded in 2016 this parents-led non-profit organization (gemeinnützige Verein) unites over 100 families in Berlin with the main goal of enabling children to learn Ukrainian and discover Ukrainian culture and traditions.

Over a hundred kids aged between 5 and 14, for whom Ukrainian is either their mother-tongue or a heritage language, are offered regular Saturday classes in Ukrainian language and literature, lectures from Ukrainian scientists and writers, organize concerts, quiz-tours and festive events.

And now that many more Ukrainian children arrived to Berlin, they are also invited to join the classes and activities organized by the school. Thus, thanks to the generous hosting support of Zalando, our Ukrainian School found a new home in Berlin for now. It allow us scaling up our school’s  activities to support many more children and expand the range of learning and other activities.

Support the Ukrainian School Berlin by donating to: 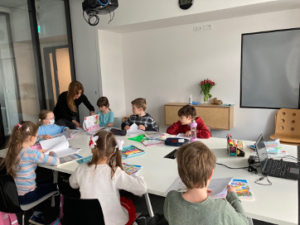 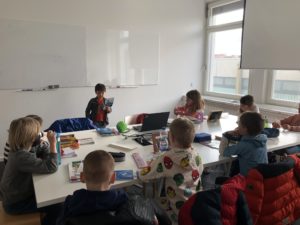