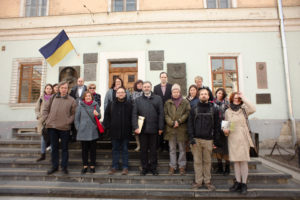 How can we place ideas? We link them to people – individuals or groups – and then we locate people and their constellations in space. Therefore, it is through an individual that an idea acquires its material dimension. International workshop “Ludwik Fleck and His Thought Collectives” aimed at bringing together a person and the city/places/spaces, Ludwik Fleck (1896-1961) and Lviv, where he was born, studied, worked, debated, contemplated, and wrote his philosophic and medical texts. Participants from different institutions of Ukraine, Germany, Poland, Switzerland, and the USA analyzed the social landscape of interwar Lviv, where different ethnic, linguistic and religious groups, different artistic communities and scientific groups co-existed and co-worked; they also tracked the changes and adaptations of Fleck’s ideas in diverse disciplinary and geographical contexts.

The seminar intended to actualize Fleck’s legacy and open up opportunities for its further application in academic and extra-academic settings. In addition to four thematic panels, participants of the seminar visited the newly-opened “Scottish” coffee house – one of the key points on the map of interwar Lviv, where representatives of the Lviv Mathematical School met; acquainted themselves with the collections of biology department of the Ivan Franko Lviv National University, where the laboratory of Rudolf Weigl was located; participated in a city-walk around places associated with the Fleck family. The seminar program featured two public events: lectures by Marcy Shore (Yale University/ IWM Vienna) and by Hans-Jörg Rheinberger (Max Planck Institute for the History of Science in Berlin).

As one of the outcomes of the workshop, the collection of abstracts was published. It is intentionally multilingual – we aimed to reflect both on the multivocality of Fleck’s environment and on the cultural backgrounds of conference participants. Each language provides readers with nuances, which could be lost in the translation. At the same time, this publication has English as a common denominator: it was the working language of the event.

The seminar was possible because of the initiative of Stefaniya Ptashnyk, DUAG member, whose Ukrainian translation of the Ludwik Fleck’s book “Genesis and Development of a Scientific Fact” was published this year by the Book-XXI. It was organized by Heidelberg Academy of Sciences and Humanities, Center for Urban History of East Central Europe, and Ukrainian Catholic University. Financial support was provided by the German Research Foundation (DFG) as well as by the Collegium Helveticum and the Ludwik Fleck Center (Zurich).

With all these different activities we tried to bring together Fleck and Lviv one more time, but I tend to believe that we achieved a bit more – we have returned Fleck’s ideas to people who are now creating new thought collectives. I hope that this project developed a new link between spaces, ideas, scholars, and researchers, as well as residents of Lviv, who now, perhaps in a new way, will discover the history of science in relation to the history of the city.