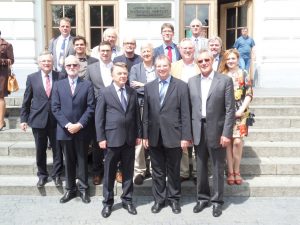 The cooperation pursues two main goals: on the
one hand, it fosters the establishment of academic cooperation in a broad range of teaching and research subjects, particularly emphasizing the exchange of students and lecturers. On the other
hand, it aims to support Lviv Universities with the equipment of scientific laboratories, libraries and seminar rooms, as the financial means of Ukrainian universities are currently rather limited. Since 2014, the JMU jointly with a few supporting business companies have been able to organize six transports with high quality used technical equipment; another transport is currently being
prepared. Within the framework of the DAAD scholarship program “Eastern Partnerships”, more than ten joint workshops and joint seminars have been carried out in various subject areas during
recent years, among them workshops in Mathematics and Informatics, Physics, focusing on Nanotechnologies, Chemistry, Medicine, Economy and Theology.

In addition, research stays were organized for more than 50 Lviv master and doctoral students, which offered them an excellent opportunity to work in research labs and institutions of the JMU and thus gain valuable experiences.

Special attention of the cooperation is put on a Joint Certificate Program (JCP) in various topic areas, which has been established by lecturers from both sides and which is offered regularly. Participants who have successfully passed the program obtain a joint certificate of their home university and the JMU with up to 20 ECTS credits. The Institute of Computer Science of the
JMU Würzburg, for example, offers JCP-courses in Computational Geometry, Algorithmic Graph Theory, Processing 3D Point Clouds and Stability of Large Scale Nonlinear Systems. Besides, the Faculty of Economy has established a JCP in Computational Economics & Econometrics. In addition, there are various summer school offers. Within the context of these courses, the participants are also provided with information on possible scholarships and grants of DAAD and BAYHOST (BAYHOST is the Bavarian Academic Center for Central, Eastern and Southeastern Europe, which promotes academic exchange between Bavaria and countries in the those regions, including Russia). As a result, several students have now succeeded in obtaining DAAD PhD grants and scholarships to support their study stays in Würzburg. In the field of Church History, the Institute of Eastern Church at the JMU and the Faculty of Theology are closely cooperating with the UCU, with subject consultations taking place regularly on both sides. In addition, the UCU researchers have an opportunity to access Würzburg libraries and carry out research stays in Würzburg. Currently, an exchange program for students via Erasmus+ is being launched. 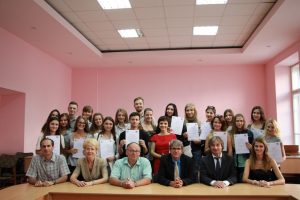 Thus, the cooperation between Würzburg and Lviv universities is very lively and the interest in scientific interaction between the involved chairs/departments has proved to be very strong.
Students and lecturers on both sides enjoy and benefit from a high-quality and personally enriching collaborative activities. It is anticipated that this fruitful cooperation will be further advanced in the future.